September 24, 2021– Results are in! At the September 23rd board meeting, the Board of Directors elected to move forward Vanguard Academy as the name of the new high school. Based on the survey results, Vanguard Academy was the top choice amongst our community, parents, students, and staff. The runner-up was Sinkiuse Innovation Academy. 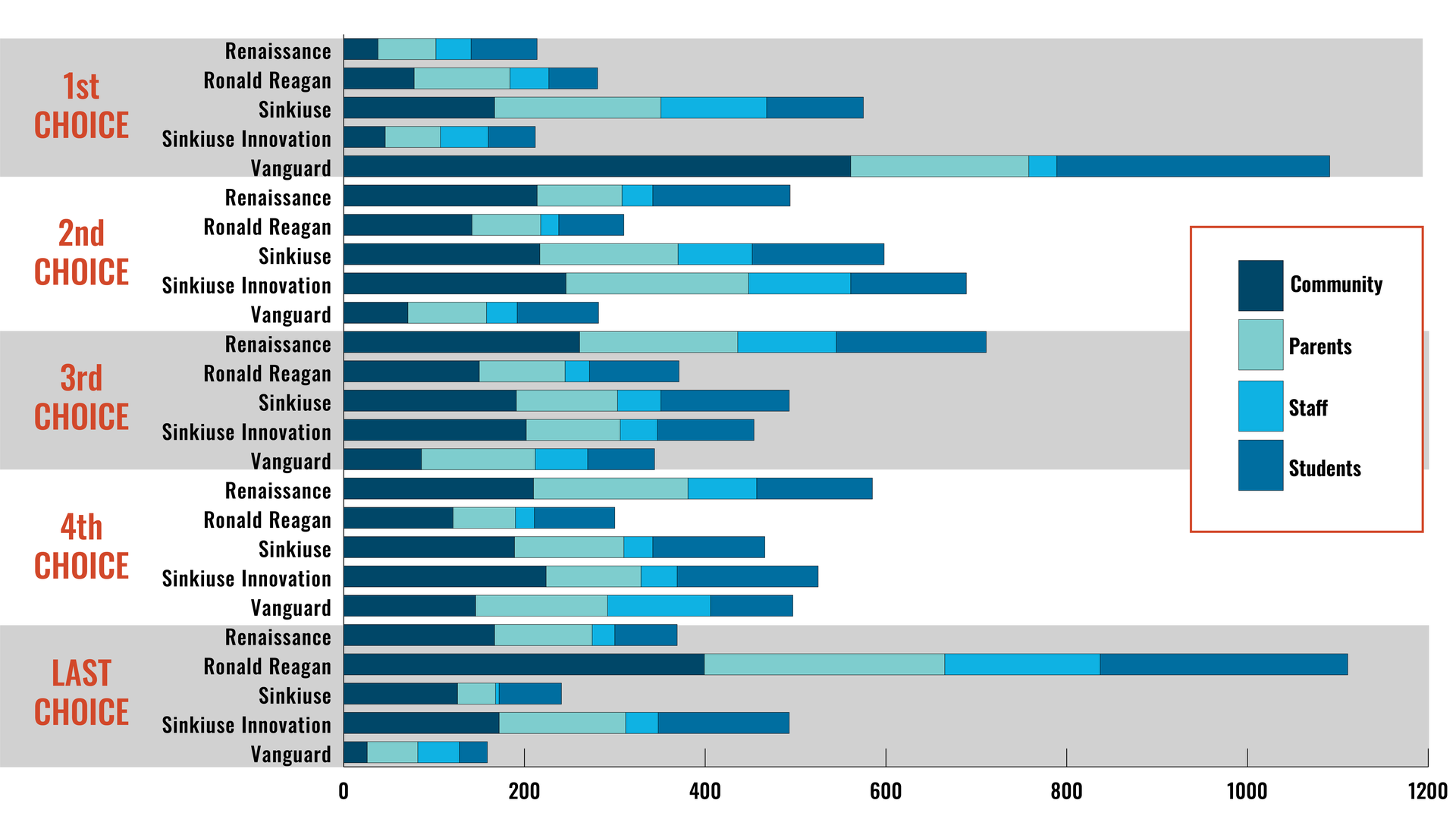 September 10, 2021– At the September 9th board meeting, our naming committee narrowed down previous community submissions (September 2020 & May 2021 public surveys) to five names for the new high school (currently referred to as Real World Academy). The naming committee is no longer accepting submissions. The finalists represent Moses Lake's community, history, and culture. Voting ends Tuesday, September 21st at 3pm. The final name is to be determined at the Thursday, September 23rd board meeting.

There are two reasons why this facility should be an academy. First putting High School to the name of the new facility will predictably lead to talk about the “New High School” versus “The Old High School” Neither facility deserves this lazy distinction. Second, the new facility should be called an Academy because it is not a traditional High School. Labeling it as such will only do it and our community disfavor. This facility is a bold new concept in education that emphasizes collaborative learning in ways that few ever dreamed of just a decade ago. Calling the new facility an Academy will instantly offer some important insight into the new school's uniqueness.

What sets the Academy apart from traditional high schools across the state?
At the new high school, students learn core subjects through project-based learning and real-life scenarios which emphasize collaboration, technology, and innovation to prepare them for college, the workforce, and trade studies. Learn more at realworldacademy2022.com
Click each name below to learn why each name was selected as a finalist:

Ronald Reagan was raised by poor parents in a small agricultural town, and even though he was not the best student, he graduated from high school and college by working hard and believing in himself.  He was even elected class president of his senior college class. Ronald Reagan began his career as an actor and went on to serve as the president of the Screen Actors Guild, Governor of California, and eventually won the Presidency of the United States.  As President, Ronal Reagan won the cold war, ended Iran Hostage Crisis, stopped runaway inflation, ushered in the greatest era of economic growth and prosperity ever, and most importantly, restored Americans’ belief in the greatness of America!

We should name the new high school after Ronald Reagan because we need our students to believe in their ability to succeed, we need them to know that this country will provide them endless opportunities if they are willing to put in the work, and we need to prepare them to work to make our country and society a better place for everyone.  Ronald Reagan did these things and naming the new high school after him will help our students do the same.

The opening of a new building in our district should be a source of pride for the entire community. We need to share with the community the pride that we all have in being a part of a dream team of educators that are leading the way for a true 21st-century school. It is being built from the ground up to reflect a new day in education. When it opens, the students who attend will benefit from a system that breaks the paradigms of education and reforms these paradigms to align with natural learning processes. We need to use the name of the school tell the story to administrators and educators from across the State who look upon our plan with anticipation and a little bit of envy.

That’s why we believe that Renaissance Academy evokes the image of a new approach with a renewed emphasis on the individual. It suggests the value we place on the person and the variety of capacities that a person can possess and still be a successful human. It represents a new day in history in the same way this school represents a new day in education. We see a sunrise iconography as representative of both the school and the community.

Vanguard speaks to leadership, being forward and in the front. It also speaks to the concept of the school itself giving students ownership over the styles and curriculum.

The town of Moses Lake, like the lake that borders it, is named after Chief Moses, leader of the Columbia-Sinkiuse. The list of community-suggested names contains numerous national and local individuals deserving of having a school named after them, the new school should be given a geographical name for 3 reasons.

- First, a geographical name will help people living across the state to mentally locate the new school. (The best name is Moses Lake but that is already taken.) Fortunately, there are several names on our list that evoke thoughts of the Colombia basin.

- Second a geographical name avoids the pitfalls of naming after a national figure who may be divisive to some individuals.

- Third a geographical name avoids the truly impossible task of choosing the worthiest local educator, coach or community leader. For example, who is to say, Jon Lane, Dick Deane, or Pete Doumit just to name a few did not touch more lives than others? Any attempt to rank the local names would be an impossible task as they are all deserving.

The Core Team at Real World thought that Innovation should be in the name to tell a little about the school.